Former Hollywood elite Richard Gere changes careers to human trafficking. On this new video he shows the world how much of a scumbag he really is when he talks about how he takes donated money and uses it for human trafficking of boat loads of ppl, most of which are military aged men, to other countries. As we’ve seen in the documentary Borderless this is far from ppl needing amnesty. 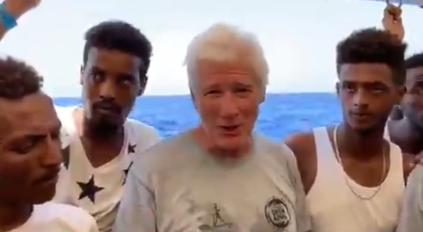 These ppl are promised a better life, jobs, healthcare, free stuff etc, and in some cases, like in South America, they are given pre-paid credit cards as they complete legs of the trip to the US southern border. It’s just another authoritarian push to bring the 3rd world societies to other countries to oppress the locals via incompatibility which then stresses the country and the “rich get richer and the poor get poorer” so that the elite can hold power and enslave the population by Socialism and Communism.